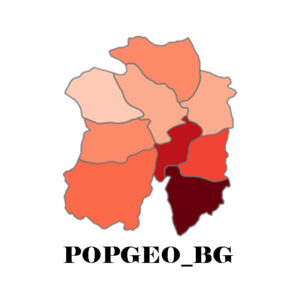 The project aims at historicizing Population Geography of Ottoman and post-Ottoman Bulgaria and at producing a spatial narrative of population dynamics that accounts for country’s spatiotemporal dimensions of population fluctuation trends, density variations with regard to geotemporal circumstances, household structure and its spatial and temporal transformations, and last but not least, it detects human migration from and to the country, as well as internal displacement over a large time period. Benefitting from a longitudinal record which extends through a long historical period (1500–1920), the project embarks on establishing patterns of Bulgaria’s population dynamics, while at the same time, by utilizing customized Historical GIS (HGIS) applications it allows for the tracking of changes not only over time but also across space, and so offer a new perspective on the interaction between population developments related to climatic, environmental, natural, socioeconomic and political processes. Hence, it aims at carrying fundamental research that will expand the frontiers of scientific knowledge and will offer benefits to scientific understanding of historical population dynamics, accounting for the geospatial and temporal patterns in these processes. The project not only fills in a gap in the population geography of modern Bulgaria’s territory during the Ottoman and post-Ottoman period, but also offers a methodological solution for the exploitation of Ottoman population and tax records for reliable population data of other parts of Southeastern Europe, something which is still notably missing from the general European population map for the historical period under study.