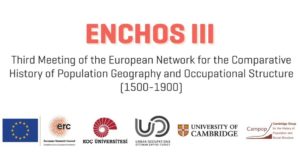 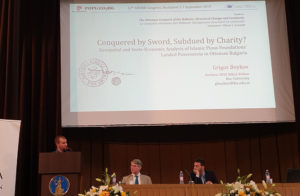 POPGEO_BG was present at the 12th Congress of AIESEE. Grigor Boykov presented a paper entitled “Conquered by Sword, Subdued by Charity? Geospatial and Socio-Economic Analysis of Islamic Pious Foundations’ Landed Possessions in Ottoman Bulgaria”. The paper was delivered in a panel devoted to the Ottoman conquest of the Balkans, organized by Prof. Oliver Schmitt (Austrian Academy of Sciences).

POPGEO_BG was present at the 3rd ESHD meeting in Pécs. Grigor Boykov presented a co-authored paper (M. Erdem Kabadayı and Uygar Karaca from UrbanoccupationsOETR Project) entitled “From imperial borderlands to core regions of a new nation state, a regional historical population geography of rural Bulgaria, 1840-1926”. The paper was delivered at the panel Empirical empires? Colonial censuses and their prospects and pitfalls for historical demography, followed by a Round table on Pitfalls and Limitations of Imperial sources.